Urgent Alert : Black propaganda against CPA and Makabayan Bloc posted all over Baguio City on the Commemoration of the International Human Rights Day 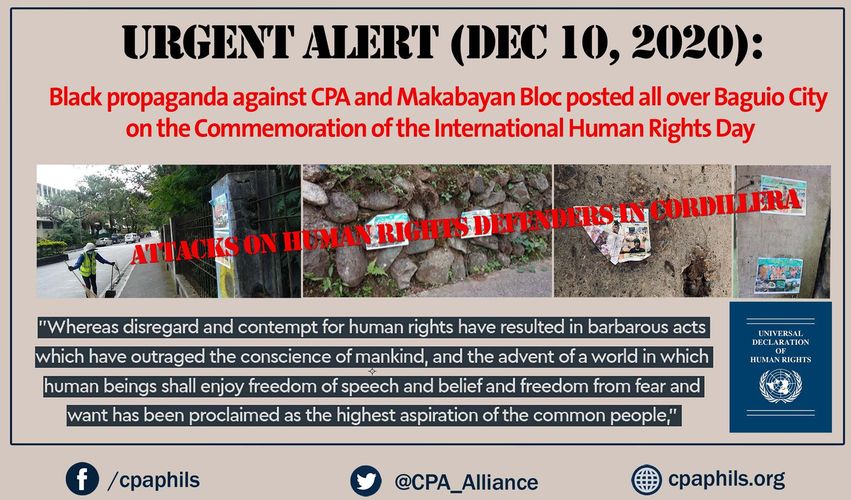 "Whereas disregard and contempt for human rights have resulted in barbarous acts which have outraged the conscience of mankind, and the advent of a world in which human beings shall enjoy freedom of speech and belief and freedom from fear and want has been proclaimed as the highest aspiration of the common people,"
- From the Preamble of the Universal Declaration of Human Rights

Today, December 10, as we commemorate the historic signing of Universal Declaration of Human Rights (UDHR), indigenous human rights defenders in the Cordillera are subjected to widespread attack in Baguio City with posters maligning the CPA Chairperson Windel Bolinget, Secretary-General Bestang Dekdeken, as well as photos of the six partylist representatives from the Makabayan bloc.

Similar posters attacking the persons of Bolinget, Dekdeken, the Cordillera Peoples Alliance and other leaders and members of peoples organizations in the region, their families, including children, are circulated in social media since the lockdown and are being documented and submitted to the Commission on Human Rights CAR and other international human rights mechanisms in the United Nations for appropriate action.

We enjoin all well-meaning citizens, our kakailian who stood with us in our defense of our ancestral lands, life and resources through the years, and in extending much needed services to the poor and marginalized sectors during times of disasters, to condemn these intensified attacks against the people's movement in the Cordillera. As these attacks are happening, mining and energy corporations all over the region continue to build and expand destructive development aggression projects that will plunder our ancestral lands that we have been trying to protect all these years. The human rights of ordinary citizens, whose only fault is to bravely stand against the rich and powerful, are in peril.

Progressive organizations in Baguio City and and the provinces are simultaneously holding their annual commemomoration the International Human Rights Day with the international community today with the theme "Pananagutan at Hustisya, hindi panunupil sa masa!" (Accountability and Justice, Not repression of the masses).