Justice for Baby River and all victims of state terrorism! 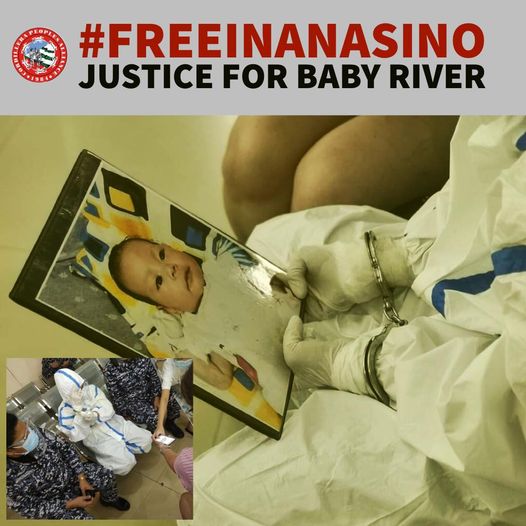 We raise our voice to join the reverberating indignation, condemning this regime's heartless treatment of activist Reina Mae Nasino and her child.

Reina was arrested last year in a nighttime police raid and has since been detained due to trumped-up charges at the Manila City jail until she gave birth to baby River on July 2020. Her child died of pneumonia in the hospital six days ago and Nasino's plea to be with her baby was denied by the court. This inhumane treatment of Nasino continues even at her child's wake which she attended surrounded by jail guards refusing to uncuff her. The fascist state elements, who didn't grant her a solemn space for her grief, even tried to forcibly take her away from the wake before the furlough, granted by the court, was up. It was not enough for them that they separated the mother from her child by continuing to detain her on false charges.

Nasino is one amongst many who were arrested and slapped with trumped-up cases by the state that doesn't recognize peoples' right to dissent and would instead brand government critics as rebels or terrorists to justify these human rights violations.

Duterte's war against the people and those who continue to oppose his brutal and corrupt governance has shed blood by the buckets. At this point when we are still struggling with the impact of the COVID19 pandemic, Duterte's irresponsible leadership and neglect of health service has caused loss and grief to the families of those who succumbed to the virus. The staggering list of Duterte's crimes do not end here.

Instead of crafting a plan to address the immediate and primary concern, Duterte and the military took advantage of the pandemic to further their agenda of suppressing the peoples' call for the government's accountability in all the gross human rights violations and worsening social conditions since he came into office.

After the establishment of the National Task Force to End Local Comunist Armed Conflict (NTF-ELCAC), this fascist state machinery unleashed a series of attacks on human rights advocates, activists and progressive peoples organizations. Their narrative of activism leading into terrorism is preposterous as it is the activists who put forward the interest of the wider public with objective criticism of government failures and abuse of power.

The peoples' rising indignation of this regime's atrocities is what threatens their grasp on power. They proceeded to weaponize the law against dissenters with the passing of the terror law. Nasino's case is an example of how the NTF-ELCAC cracks down on activists, human rights defenders and all who dares to raise their voice against state violence and injustices.

So who are the real terrorists?

Activism is not what kills people. The fascist Duterte regime is what continues to slaughter innocents and is complicit in deaths like that of three-months old baby River.

The state force's disrespect of a supposedly solemn space for Nasino and her child is bestial and cruel. These fascists who do not honor the dead cannot claim integrity nor humanity. They remain to be loyal dogs of a brute.

We enjoin all who stand for life and truth to condemn these acts of terror by the state and echo the call for justice. It is never a crime to stand for the interest and welfare of the people.

Free Reina Mae Nasino! Free all the political prisoners!
Activism is not a crime!

Justice for Baby River and all victims of state terrorism!