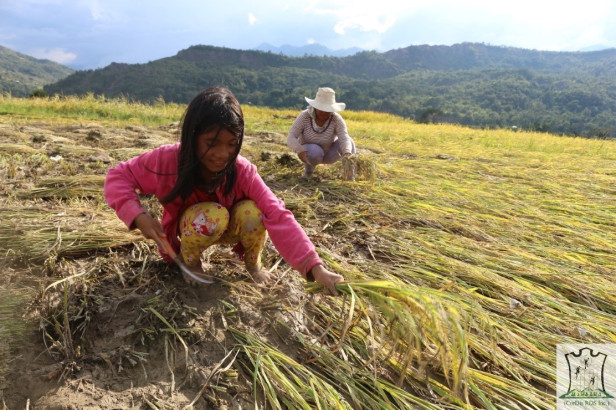 With the extensive and debilitating damages left by Typhoons Lawin and Karen, the Serve the People Brigade (STPB) and the Peoples Welfare Commission issued its appeal for support and assistance to help the disaster survivors rise up from this situation to rebuild their lives.

Government data indicate that approximately 475,000 persons were affected in the Cordillera region. Most affected communities include Dolores and Lagangilang and other municipalities along the Abra River in Abra, Tabuk City, Rizal and Pinukpuk in Kalinga and Conner in Apayao.

Massive damage agriculture is experienced in all provinces of the Cordillera. Entire rice fields and vegetable gardens were buried in landslides, flooded or washed out. Rice paddies along the Abra River in Quirino, Ilocos Sur were ‘cemented’ from wastes believed to be mine tailings from the Lepanto Mining Company. Damage to crops such as corn, banana, coffee, vegetables and fruit trees was in the different provinces. There were also cases of livestock being swept away by strong river current. Reports indicate that agricultural damage is estimated to more than 695 million pesos. In Tabuk alone, the Local Government Unit declared at least one billion pesos damage to agriculture and infrastructure.

Majority of the farmers are still reeling from the impacts of previous typhoons and El Niño so immediate food supply is limited and starvation is a threat in some areas. Recovery of agriculture will entail years as it will take at least 5 years for coffee and 2 years for banana to recover. Rice shortage is expected to last for at least one year.

Typhoon Lawin had also severe impacts on housing and infrastructure. Based on reports, a total of 34,387 houses were damaged by the strong winds and rain forcing several families to leave their houses and take shelter in safer grounds.

In response to the situation, the STPB conducted assessment activities covering most of the affected areas and communities. And based from the results of the assessment, the needs, capacities, and gaps, the network propose to respond to the situation. STPB is targeting to raise funds for planned emergency response and early recovery activities of the affected communities. This will also enable us to address the immediate needs of some of the most affected areas in the region. The appeal also aims is to provide access to food, temporary shelter materials such as plastic sheets, livelihood inputs such as seeds and farm tools and longer term livelihood assistance to help communities recover.