Looking beyond indigenous attires: From the Cordillera to North Dakota, the IPs are rising

In the light of confusion and misperceptions on the use of indigenous attires during a peaceful protest at the US Embassy which turned violent when the Manila Police District (MPD) rammed over the protesters, the Cordillera Peoples Alliance (CPA) is obliged to clarify and register its position on the issue. 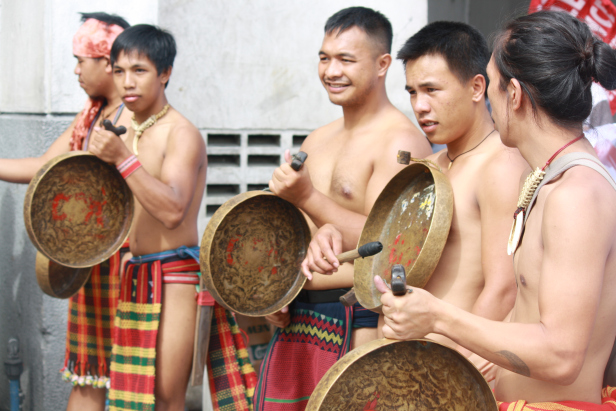 In recent events, from the Philippines to North Dakota, the struggle of indigenous peoples for land, life, resources and self-determination is gaining wider ground. Clad in their colorful indigenous attires and placards, the national minorities of the Philippines and Sioux tribe in North Dakota share a common enemy – destructive US companies and a repressive State.

Like the Sioux tribe who are protesting to protect their sacred grounds against a pipeline project when the North Dakota State police and private guards used canine dogs and violence to disperse the protesters, the Manila Police District is no different. Despite the peaceful protest action by the national minorities at the US Embassy to highlight the destructive and violations of US mining, energy corporations and plantations in the territories of indigenous peoples and the Moro people, the Manila Police District used tear gas, truncheons and including a police patrol car to run-over the protesters.

Around the world, indigenous peoples use their indigenous attires to protest and defend their land, life and resources from destructive projects. History also instructs us that our forefathers transformed our culture, resources and territories as weapons and victoriously fought the invaders.

It is true that our indigenous attires are not made for protest actions but we also need to recognize that wearing tapis and wanes is a matter of identity and self-determination. What is more important is on how we wear it properly. More than these, we believe that culture is dynamic and evolving. The world is changing and the traditional sacredness of our attires are also changing. This is not to say that by dynamism, we reduce the significance of our traditional attires—in fact we make it more honorable when we wear it with pride and resistance from development aggression and in defense of land, life and honor.

When we use our material culture such as tapis and wanes during protest actions to defend our land, life and resources which are the core of our existence, is it not an act of honor? We need to look beyond the issue of the traditional sacredness of our material culture and instead develop our culture to respond to these challenging times.

Let our tapis, wanes, uggayam, ullalim as weapons in advancing the issues of land, life and resources to greater heights.

If you can stand for the Sioux tribe in North Dakota, the national minorities of the Philippines also need your support. National minorities in the Philippines are enormously faced with big issues of development aggression, militarization and human rights. In the region, the issues mining, energy, militarization and human rights violations continue to experience by our communities. Adding to these problems is the recent impact of the Typhoon Lawin which devastated rice fields, farms and other livelihood of our people.

Together, as people, we shall overcome.***